In this one of a kind DVD set, hosted by Luna Shimada, for the first time together, Master Magicians Finn Jon & Yigal Mesika, unveil the best kept inside secrets to using Loops. Learn first-hand, from the Creator and Innovator of this versatile and powerful apparatus how to easily perform impossible effects using normal, everyday objects. If you've ever wanted to create the illusion of having "supernatural powers" that will mesmerize the most discriminating audiences, here are the secrets...

Volume 1
Finn Jon the Grand Master of Levitation is seen performing here with his groundbreaking invention, Loops. Finn is a virtuoso in the world of Magic and an inspiration to many master magicians. Here you will see Finn performing in his unique, classic, style, wowing audiences with amazing effects using Loops. Finn's grace, style and humor are as entertaining as it is education. He shares his philosophy; tips and many intimate secrets learned from decades of experience and take you through the fundamentals of creating incredible magic that will be unforgettable! Don't miss the chance to watch a legend at work...

Volume 2
Get inspired by Yigal Mesika to live the loops! Mesika, who gave Finn's creation phenomenal versatility, has performed in 40 different countries using the Loops and elevated it to an art form. He is seen here live and unstaged, warmly interacting with the audience, charming and confounding them with his signature effects that are absolutely undetectable to hypnotized onlookers sitting right next to him! Even skeptics are dazzled! Learn from the leading master of Animation and Levitation the top secrets on how you to can create an impossible reality! You will be able to perform a complete half hour show based on this one tool that will totally ROCK your audience!

* INCLUDES: The patented Innercircle Card, the official carrying case for the most astonishing and versatile tool in magic, Loops! This custom-made carrying case was specially engineered to look like a credit card making it extremely convenient to slip right into your wallet, not only protecting your Loops, but also making them easily accessible.

Now the power to Loops can be yours...

"I never leave home without it!"
- Criss Angel MINDFREAK 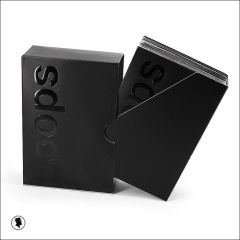