The most EXTREME rubber-band penetration effects you'll ever perform!

Menny Lindenfeld's first and original TRU™ was hailed by the International Magic community as the MOST VISUALLY-STUNNING rubber-band penetration effect created! It still remains a huge BESTSELLER.

TRU™ Xtreme is NOT a 2.0 release. In TRU™ Xtreme, Menny Lindenfeld not only further explores, but also elevates rubber-band penetration effects to NEW VISUAL EXTREMES THAT DEFIES BELIEF!

The effects in TRU™ Xtreme are BEYOND AMAZING and way too SURREAL to be described. What you get is TRU™ ON STEROIDS!

Menny Lindenfeld is well-known and Internationally respected for his clear and in-depth teaching that encompasses not only the smallest details, but also focuses with precision, on how each aspect of the method works... and even more importantly - Why? Each volume includes excellent tips on moves, angels, plus performance demonstrations with a real spectator.

In VOLUME #01 you'll learn the core principle behind TRU™ Xtreme, and how to use it for an endless number of effects.

• While a spectator holds your fingertip, a rubber-band visibly links ON & OFF your finger. The band penetrates through your finger in the most visual and impossible way.
• Make a RB visibly penetrate through any spectator's finger. (New method, different from the one taught on the first TRU™.)
• Cause a RB to visibly melt off and unlink from the spectator's finger.
• Choreograph the various moves into a powerful multi-phase routine.
• A new visual method to perform a Band-Through-Band effect, using two bands of contrasting colors.
• Volume #01 concludes with a homage to Menny Lindenfeld's original TRU™. Perform the CLEANEST and MOST VISUALLY-INSANE Finger-to-Finger-Jump effect ever created! (New method).

In VOLUME #02 you'll learn another original TRU™ Xtreme method - this time using a Sharpie® marker and various other objects.

• Learn the CLEANEST rubber-band-through-Sharpie® effects.
• Make a RB visibly link ON & OFF the center of a Sharpie®.
• Cause a RB to penetrate other objects such as: a thick marker, pencil, straw, fork, spoon, etc.
• Method variation with a thick RB.
• Demonstrate the effect with the neck of a borrowed beer bottle - while the spectator holds the neck-end.
• Perform TRU™ Xtreme with borrowed sun/eye-glasses. Make the RB melt through the temple - while the spectator holds the temple-tip.
• Choreograph the various moves into a multi-phase routine.
• Volume #02 concludes with a second, ADVANCED TRU™ method using a Sharpie® and other objects - held by a spectator.

In VOLUME #03 you'll learn another TRU™ XTREME method variation of the principle taught in Vol. #01.

• With your palm upwards and flat open, wrap a RB around all the fingers. As you pull the band, it visibly melts through - one finger at a time.
• Let a spectator himself pull the RB through your fingers!
• A reversed method variation. Cause a RB pass through one finger at a time - in reverse!
• Make a RB jump through the fingers as you lightly shake your hand.
• Cause a RB penetrate two fingers with one pull.
• Perform some of the moves and effects using the cord of borrowed earphones. (New method).
• Menny's all-time favorite! Cause a RB melt through your finger in SUPER SLOW MOTION. The visual effect of the RB slowly passing through the flesh of your finger looks LIKE A CAMERA TRICK!
• Volume #03 includes various multi-phase routines.

"TRU Xtreme is brilliant! The band jumping on the spectator's finger and other objects fooled me badly."
- Joe Rindfleish - 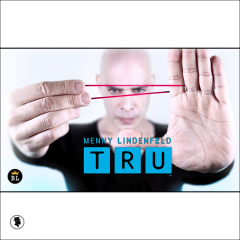 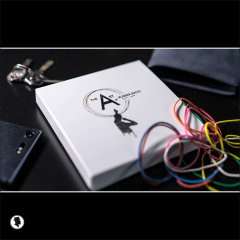 The Art of Rubber Band 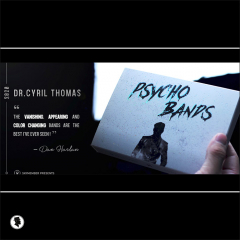